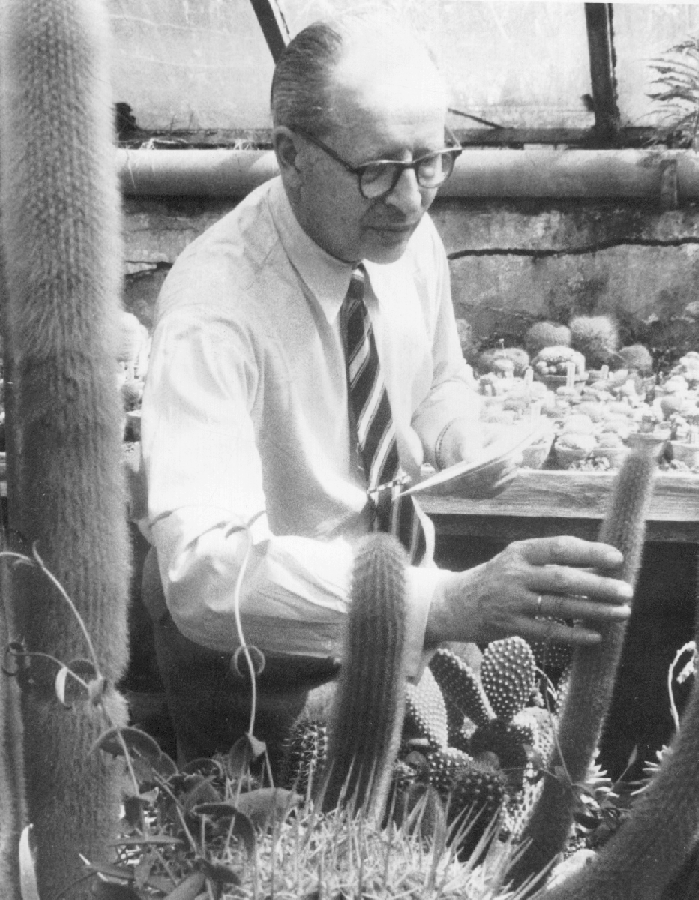 Initially Walther Haage was not prepared to take over the cactus nursery. His older brother had started his education while Walther was preparing to study botany. But the brother was killed in the first gas attacks of the First World War.

Now Walther receives his gardener education at Pfitzer (Fellbach near Stuttgart), was a frequent guest at the house of Alwin Berger and is involved in the first decisions of his father's nursery.

He makes numerous contacts in Germany, but also in Belgium, Italy and Sweden. These contacts helped him to revive the company weakened by the First World War. After the death of his father, he took over the management in 1930 and expanded the business into a highly effetive seed farm.

Walther Haage quickly became an important protagonist of the cactus world. With his enthusiasm and his immense expertise, he is committed to the popularisation of cacti. Despite the inflation in the early 1930 he finances complex collection expeditions to America. One of these journeys leads to the sensational rediscovery of the Astrophytum asterias by A. V. Fric.

Sales all over the world

Thus the name Haage soon stands for a rich special assortment, which is sold all over the world. In the coveted illustrated catalogue, the two cactus nomenclature systems of Prof. Schumann / Alwin Berger and Prof. Britton / Rose are juxtaposed for the first time - a process that triggered great debate at the time.

Walther Haage also made a name for himself as a publicist. Already his first work "Cacti in a Home" was published in several languages and numerous editions.

Many more publications will follow.  This also includes the comprehensive cactus dictionary "Kakteen von A bis Z", which is still in demand today. Since 2009 there is an updated Publication available.

The IOS (International Organizations for Succulent Plant Research) honored Walther Haage in 1990 with the "Cactus d'or" (Golden Cactus) for his services to the popularization of cacti.

The genus Haageocereus and Monvillea haageana are named after Walther Haage.

The Third Reich and the 2nd World War

During the Nazi period, Kakteen-Haage did not stand up easily. The exotic cacti were considered "un-Aryan" and therefore suspiciously blanket. Time of war required concentration on food production. Vegetables are growing in the cactus houses.

In silence, however, the cactus collection will continue to be maintained. Cacti can be found even in this difficult time in the seed list. However, the end of the Second World War brought the business into a real life-threatening crisis. Only a coincidence and the commitment of a Russian officer allowed Kakteen Haage to survive the post-war years.

The city of Erfurt is comparatively little damaged after the war. The supply, however, completely collapsed in 1945. No wonder it was impossible to get enough coal for the heating of the greenhouses. In the winter of 1945/46, the entire cactus collection threatens to freeze to death. Most of the fruit trees from the garden had already been burned, and also a woodshed had been used for the heating.

In this situation, Walther Haage was picked up by Russian soldiers. The family is in fear. Many of the nurserymen of this time have disappeared without a trace.

Walther Haage, however, has a positive experience. He is brought to the Soviet city commander Colonel Baranov that night. Prior to his military service, Baranov was curator of the Leningad Botanical Garden.

Instead of a grueling interrogation, the two men delve into an intensive discussion about cacti. The next day Walther Haage Baranov shows the cactus collection. Deeply impressed, Colonel Baranov takes care of the rescue: a few days after his visit, several truckloads of coal arrive to heat the greenhouses.

In the first years of the GDR, a large number of companies were nationalized. Kakteen-Haage, a too specialized company remain in private hands. But there were many harassment during this time. Access to materials and tools has been limited. The companies were forced to pay employees lower wages than in a state enterprise. At least in 1961 Walther Haage had to allow state participation. In 1972, Walther Haage is invited to Leningrad to celebrate the 150th anniversary of Kakteen-Haage. Meanwhile, the nursery in Erfurt falls victim to the last expropriation wave and, as "Brigade Kakteenzucht", becomes part of the "Volkseigene Gut Saatzucht Zierpflanzen".

The expropriation ends an era: the over seventy-year-old Walther Haage has to retire from the business.

But who brings the competence to run the business? Despite the adverse political circumstances, the next generation, Hans-Friedrich Haage, is ready to continue familys tradition even thru difficult times.