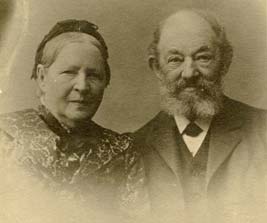 Gustav Ferdinand Haage had a very difficult start when he took over the company from his father. On the one hand, he had to pay his brothers their inheritance, which already burdened the company excessively. Added to this were the difficulties brought about by the mood of new beginnings in the Wilhelminian era: industrialization also invaded Erfurt. In 1870, the Haage factory site was in the way of railway construction; it had to move to the surrounding area of Petersberg Fortress. There, at the gates of the city, he was subject - like the entire surroundings of the fortress - to the so-called district restrictions.

Every structural change was strictly regulated, even for earthworks.

The " Ofenkrieg " - cacti in front of the fortress wall

Even the installation of furnaces - which were indispensable for heating the greenhouses - was the subject of an intricate approval procedure. The fortress administration wanted to prevent anything in the surrounding area that would have brought advantages to a possible enemy in the event of an attack. These included ovens.  Correspondence from this unarmed "furnace war" with the fortress administration can still be found in our archives.

At that time, good business was out of the question. Gustav Ferdinand gives up and hands over the business to his son Ferdinand Friedrich Adolf Haage in 1888.